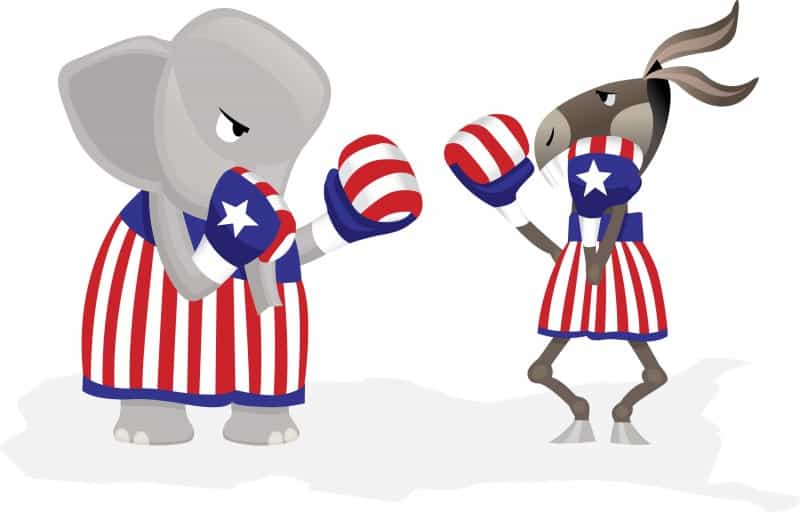 It is almost certain that when Americans go to polls to elect a new President they will choose between only two candidates: one from the Republican and one from the Democratic parties. This is known as a Two Party System. While it is absolutely normal for American citizens as “it has always been so”, most foreigners have a hard time grasping why it goes this way. In pretty much any other democratic country in the world there is no such political set up. So what is the reason for it in the US?

Is the Two Party System in the Constitution?

First of all, it is important to understand that there is no law or any other legal restriction for it to be so. In fact, the US does have other parties. And occasionally those parties even get to win representation in Congress or even win a Presidential election.

So why is it always only about the Republicans and the Democrats?

The reason why there are only two major parties in the US is that usually taking the win is pretty simple: the states enact a “winner takes all” model. Most states assign all votes given to them via electoral college to a party that gets majority of votes. That means that it doesn’t really matter whether a party gets 5% or 25% of votes if there is at least one other party that got a higher percentage. The runner up and any other contestant get absolutely nothing. Such system, thus, allows only for major parties to survive and get their candidates in Congress or to be elected as POTUS, because in order to get their candidate elected this third party would have to  beat both Conservative and Democratic parties in majority of states, and that is virtually impossible at the moment.

In 1992 Ross Perot, who ran as an independent candidate, received 19% of overall votes and got 0 (that’s a zero) electoral votes.

At the same time, there are a lot of third party candidates who run for POTUS in almost every election. Not many of them get substantial financial support or media coverage though. And in the modern world without those two it would be extremely hard to win an election. The other important fact is that even if a third party candidate would win an election, in order to have any support in Congress they would have to align with either Republicans or Democrats. Otherwise, without any allies it would be extremely hard for them to get anything done.